Skip to content
An Aesthetic Review of the AAF
AAF

An Aesthetic Review of the AAF

If the Alliance of American Football understands one thing, it’s that in order to be cool, you have to look cool.   For an entertainment medium to be successful, it […]

If the Alliance of American Football understands one thing, it’s that in order to be cool, you have to look cool. For an entertainment medium to be successful, it must be able to move merchandise. Despite the television show Young Justice’s incredible popularity among millennials, it was cancelled after just two seasons due to lackluster toy sales. Yes, Young Justice has now returned on DC comics’ streaming platform in response to a massive social media campaign, but the agony of the intervening years between season two and season three of the show could have been avoided if merchandise promotion were more successful.

In its infancy now, the Alliance of American Football (AAF), if it hopes to grow, needs to be able to move merchandise. With only eight teams, growth will only be possible if awareness increases, followed by those who are aware converting to active fans, ultimately to invest in a specific franchise. The league, at present, feels generic and cheap, but even less than that, almost fake, with attention to the league garnered by confusion rather than genuine curiosity. Furthermore, with the XFL revival planned for 2020, several questions are raised. Is there room for two minor football leagues? With the previous failure of the XFL, how will this run be different? Why would a competing league think they might have more success? If only one league survives, which one will it be? 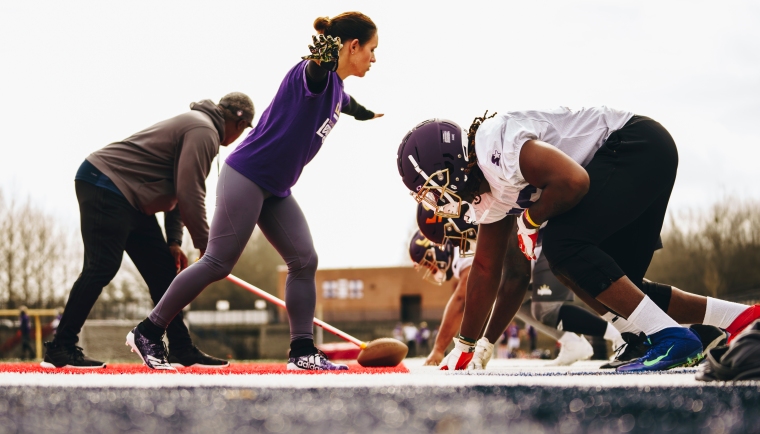 The answer to that final question will likely come down to merchandise sales, not only because of the bottom line, but if a league is moving merchandise, that means it has actually begun to develop a dedicated fanbase. Let’s dive in, then, on the AAF from an aesthetic point of view. After all, professional football is supposed to be entertainment, and if the AAF wants to survive, it should heed the words of Maya Angelou, who said, “My mission in life is not merely to survive, but to thrive, and to do so with some passion, some compassion, some humor, and some style.” Sure, this is football, so the AAF can drop the compassion, but it must hang on to the passion, humor, and style.
First up, team names. A fan can’t be embarrassed to let you know who they’re rooting for. Declaring fandom of the Detroit Pistons, for example, instills a steely disposition, saying, “Don’t mess with me, or I’ll get fired up like a piston!” A fan of the Superchargers of Los Angeles? Well, clearly they’re supercharged all the way up to run for some gosh darn touchdowns! Team names matter. With regard to the AAF, my ranking is as follows:
Team Name Ranking:
8. Birmingham Iron – Yes, iron is a metal. It can be forged into something useful, but iron itself isn’t exactly threatening or cool. Plus, it limits the color scheme to dull, unattractive colors.
7. Atlanta Legends – A bit obvious. Everyone wants to be a legend, but it’s generic. Something more anthropomorphic would’ve been nice.
6. Salt Lake Stallions – The horse thing is so overdone. Do you know what happens to stallions? They get mounted. Congratulations, Salt Lake.
5. Arizona Hotshots – This is the first team on this list that I think understands the importance of a name. It’s still a bit vague, but it captures the humor part of the entertainment industry. “Hey, hotshot, you’re on fire!”
4. Memphis Express – They’re going to take an express train to the top! It could be a jet, it could be a train, it could be a really fast running back going endzone to endzone. Simple, but hits the mark.
3. San Antonio Commanders – This is where I start to say, “Yassss queen!” in response to these team names. It’s militaristic. It’s fierce. San Antonio isn’t full of frontline infantry men that are there to do the dirty work. They’re commanding the charge.
2. San Diego Fleet – You know what’s more intimidating than a military commander? A fleet of warships. Do you know how many sailors those things can hold? Have you ever seen Top Gun? Any one of those aircraft carriers of San Diego could have Maverick aboard. Watch out.
1. Orlando Apollos – It’s Greek. It’s godly. It’s not just the Apollo, Greek god of the sun. It’s the Apollos. You think one Greek god is tough? What about a whole football team of them? Oh, by the way, what did Apollo ride? A chariot of fire. Yeah, game over forever.
Working our way to the ever-important merchandise, color scheme is just as, if not more, important than the name themselves. For this list, I’ll also consider logo design.
Logo and Color Scheme Ranking:
8. Birmingham Iron 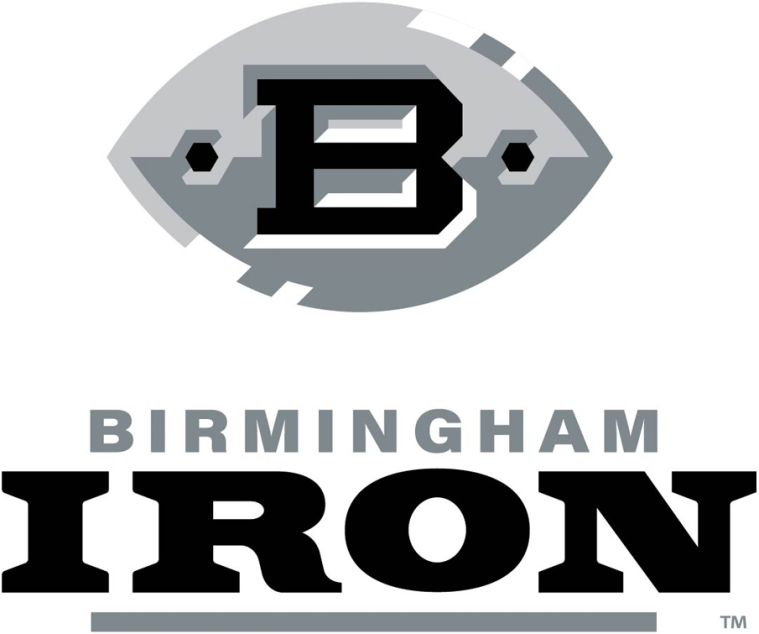 Ouch. At the bottom again. It’s an iron football. Am I supposed to think that that’s creative? Black and grey for a color scheme? “Hi, we’re boring and afraid to take a risk. Want to join us?”
7. Salt Lake Stallions 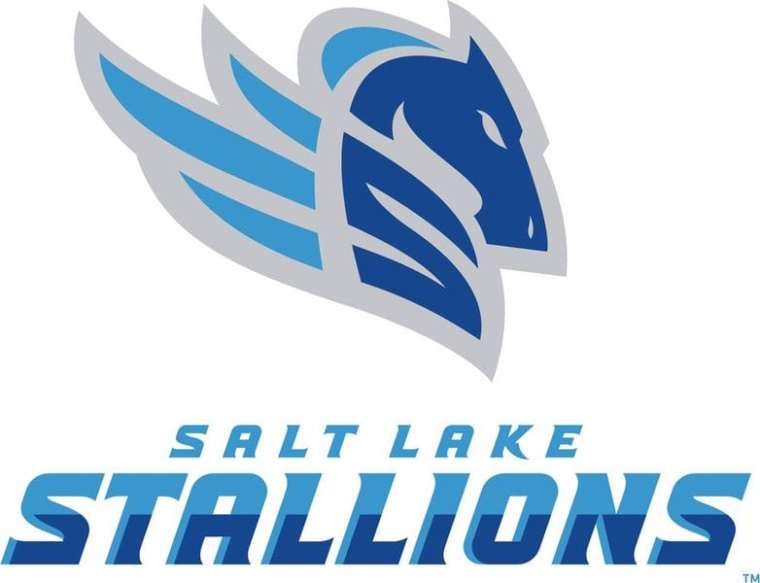 I imagine the marketing meeting went something like, “What goes well with dark blue? Oh, I know, a lighter blue?” It’s a predictable horse logo. It’s generic. You can do better, Salt Lake.
6. Memphis Express

The logo just leaves a bit to be desired. The jet doesn’t even appear to be going that fast, and a red and dark blue color scheme? We get it, you love the USA.
5. Atlanta Legends

While the crown doesn’t exactly make sense because a legend doesn’t imply royalty, Atlanta found themselves this high on the list because of a bold color scheme, purple and gold. The logo is definitive, and while far from perfect, is worthy.
4. Arizona Hotshots 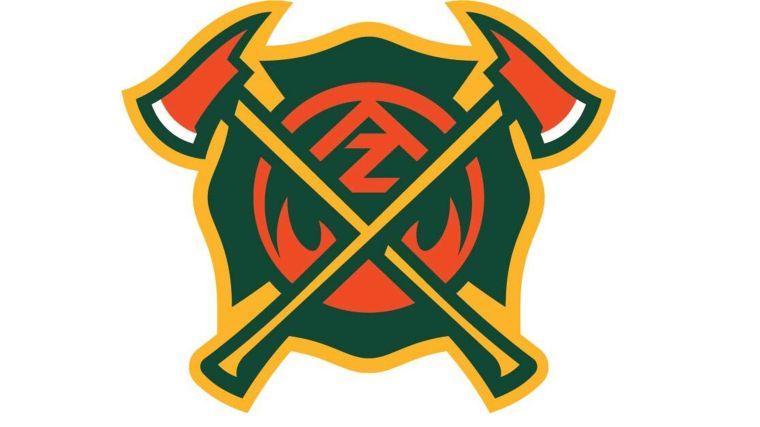 Arizona has a great color scheme of orange and green, and the allusion to a firehouse logo is nifty. It does take away from the name, though, as the hotshot is apparently a firefighter, and not a 20s gangster in a fedora flipping a coin constantly.
3. San Diego Fleet

The colors are bright, and the ship looks powerful. You might even say the Fleet are on fleek. I could slap this logo on a sleeve, on a hat, or get it tattooed on my neck and be proud.
2. San Antonio Commanders

It’s got a sword. San Antonio is here to fight. The reds are bold and attractive, just like everyone in San Antonio.
1. Orlando Apollos

I mean, come on. It’s an O and an A in one! I know that’s not exactly revolutionary, but the fact that the A is formed by Apollo readying a freaking bow and arrow, now that’s cool.
Now, the official league merchandise is a goldmine. I don’t have the space to do the shop justice, but suffice it to say the shop is filled with amazing items that deserve a write-up all to themselves, which will be coming later. In the meantime, check out the AAF, and start stocking up on merchandise from your favorite team so that the AAF will dominate the XFL.