Skip to content
Double or Nothing: Or a Thank You to Jericho
AEW

Double or Nothing: Or a Thank You to Jericho

As promised, though a little belated, I am writing my recap of the first pay-per-view for AEW.  It was awesome. My brother watched it with me and he is what […]

As promised, though a little belated, I am writing my recap of the first pay-per-view for AEW.  It was awesome. My brother watched it with me and he is what you would call a lapsed fan.  He and I would watch WCW Thunder every Thursday during our middle school years.  I discovered Rey Msyterio, Chris Jericho and the NWO, while my brother was a fan of Disco Inferno. A few short years later, WWF/E squashed the WCW with the invasion angle and we kind of lost interest in wrestling. Anyways, the AEW has brought back excitement for pro wrestling for the first time in a while, so lets breakdown Double or Nothing shall we?

I didn’t watch the casino battle royale live.  That was the pre-show.  I went back and watched it later.  It was fun.  They brought back a handful of older wrestlers and some characters from the indies.  I discovered Orange Cassidy as he “kicked the hell” out of Tommy Dreamer’s legs and then was immediately tossed out of the ring.  I have since youtubed the crap out of his matches.  His comedy persona really struck a chord with me and he has won me over. #FreshlySqueezed.  Jimmy Havoc stapled a lit cigarette to Joey Janela’s forehead, staple gunned Tommy Dreamer’s testicles and made it to the final 4. Havoc eventually lost his staple gun and was tossed. MJF thought he had won but Hangman Page, the surprise entrant, eventually got the W.  Luchasaurus was also in this and survived a long time.  He’s another wrestler that I now have a rooting interest in.

Moving on to the highlights of the show

The 6-man tag team between SCU and the OWE’s Strong Hearts was what you wanted to start off a pro wrestling event. It had good pacing, a clear size difference in the wrestlers and some amazing acrobatics from Scorpio Sky and the OWE dudes.  Eventually, the big guy from SCU was in the ring with the smallest guy from OWE, Lindaman, and SCU got the win.

Next we had our first big reveal. What was supposed to be a triple threat match between 3 of the women wrestlers, Chief Brandi Officer strutted down to the ring and the implication was that she was going to insert herself into the match. But big swerve, it was AWESOME KONG! turning the match into a fatal four-way.  It was awesome. Smiley Kylie and Britt Baker showed off what they could do. Nyla Rose and Awesome Kong brawled for a lot of the match. Awesome Kong showed her authority by doing a powerbomb on all 3 of her opponents at the same time.  Eventually, Nyla and Awesome Kong were knocked out of the ring and the wrestling dentist Britt Baker DDS got the victory.

Skipping ahead to my favorite match of the evening. Cody vs. Dustin Rhodes.  Brother vs. Brother.  The match had the most amount of “Cross Rhodes” that I have ever seen in a match. There was a Dusty Rhodes chant to start off the match. Cody’s ring entrance was a shot at HHH. He grabbed a sledgehammer from his wife Brandi and busted a skull death chair with one powerful swing.  Brandi delivered a powerful spear outside of the ring on Dustin and was eventually kicked out of the match and was carried off by Diamond Dallas Page.  Very cool to see DDP as a former WCW fan.  Dustin fought most of the match with a bloody crimson mask.  This match had so much blood.  Cody’s weightlifting belt was used to spank his bare ass.  Eventually, Cody hit a cross Rhodes that won him the match.  The twist in this match was that Cody asked Dustin to be his tag team partner at the Fight for the Fallen in Jacksonville.

The Young Bucks and Lucha Bros put on a great match as expected. lots of flippy stuff and super-kicks. Go watch it! it was one of the best tag-team matches of the year. I wanted to point out that the 6 women tag team was very entertaining as well.  Liked seeing Riho do the spinning head scissors and the 619.  The next match was Alpha vs. Omega II.

Jericho came out to a jumbotron that read I Am Jericho and they did a montage to all of his characters he had been.  Even paid homage to list Jericho and Lionheart. I liked that.  Omega wrestled most of the fight with a broken nose.  It was a brawl. Omega was knocked into the crowd and Jericho did his cameraman gimmick, and was ended by Omega spitting water on him.  Lots of big bumps, and somehow Jericho won with his Judas Effect. Then Jericho did his mic work and it was spectacular. He was ranting and raving and told the fans to shut up(you idiots) and that they owed him a thank you!  Then the big surprise happened.  Jon Moxley came out to the delight of the fans, interrupted Jericho with a DDT He DDT’d the ref, and eventually got into a scuffle with Kenny Omega with Moxley slamming Omega off the oversized stack of poker chips stage.  What an incredible ending to an incredible match.  Lots of classic Jim Ross lines from the commentary booth as well.   Jim Ross had no idea Jon Moxley was coming and he called it a stone cold moment.  Hell, I even jumped out of my seat and said “No waaay” I totally was not expecting that either. I am stoked for what is next to come with AEW.

Double or Nothing kept my attention from beginning to end, it was one hell of a way to kick off the start of a wrestling Organization. All Elite Wrestling is for real! Thank you AEW and most of all thank you Chris Jericho, 😉 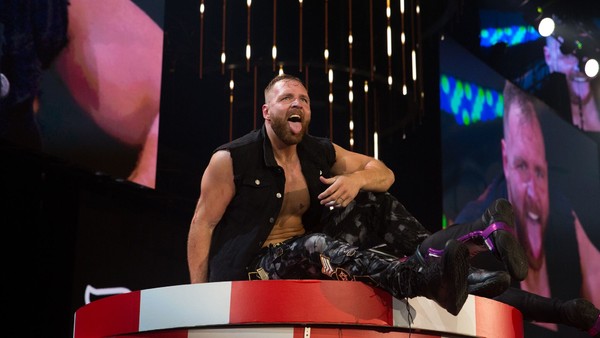 Jon Moxley’s next match is 6/5 for New Japan Pro Wrestling.  He will be taking on Juice Robinson.  I highly recommend watching this on Axis TV 6/7 at 8pm.

I dabble in long distance running, video games, and sports. Sometimes I write about those interests.