We have a new leader, and his name is Wooloo.   Camps have been clearly established. Trainers have established loyalty to their #GrookeyGang, #SobbleSquad, and Scorbunny even has drummed up […]

We have a new leader, and his name is Wooloo.

Camps have been clearly established. Trainers have established loyalty to their #GrookeyGang, #SobbleSquad, and Scorbunny even has drummed up a reasonable following. With little known about the Galar region, trainers have exhausted their allegiances to these starters with no shortage of fan art or predictions for final evolutions. On the June 5th Pokemon Direct, trainers finally got some information about new features, new Pokemon that will be encountered in the Galar region, and the release date for the hotly anticipated upcoming games, Sword and Shield.

Most notable among the new features was the introduction of Dynamax Pokemon. Trainers holding a special Dynamax bracelet, in some situations, will be able to command their Pokemon to grow to Godzilla-like proportions. This is a skill that can be used once per battle, and Pokemon will be large and in charge for three turns. Ultimately, though, this begs the question of if a stadium is full of people, and an electrode goes Dynamax and uses self-destruct, does everyone just die? I guess we’ll find out. This is Pokemon, though, so I’m guessing death will be minimal.

Gyms, quite frankly, look fucking awesome. They’re huge. They’re grand. They’re everything promised from the anime. As the primary source of entertainment in the Galar region, gym battles are broadcast on television, and stands will be full of spectators. My hope is that as a player progresses through a game, fans will start displaying their support for you, because forget anonymity in the Galar region – I want to be famous!

In the wild area, Pokemon will appear in the overworld, and the scale and beauty looks phenomenal. Time and weather will dictate what type of Pokemon are out in the region, so repeated exploration will be necessary to see everything. While exploring, players can now shift the perspective using the right analog stick, so it really feels like we’re getting a large-scale, open-world adventure. At last.

In the wild area, there will be totem markers where you will be able to join up with other trainers for a max raid battle, in which a team of up to four trainers will take on a Dynamax pokemon, and, if successful, it appears one trainer will have the opportunity to catch these wily rascals. This does introduce online play in a big way, but it doesn’t appear Nintendo has ruined it … yet.

We were also introduced to some of the people of the Galar region. Leon is the current champion, and has never been defeated in an official Pokemon battle. I kind of call bullcrap on that, but we’ll let him continue that lie until a ten year-old wipes the floor with him. Leon’s younger brother, Hop, will be your rival, and he seems like a chill guy to demoralize all along your Pokemon journey. I just hope we can be ruthless to this rival, and not have a dumb forced friendship. The only friends I need reside in Pokeballs.

Professor Magnolia will be the esteemed professor of the region, and she’s second in greatness only to Professor Elm, don’t @ me, bitches. She researches the Dynamax phenomenon because she’s large and in charge, y’all. She came to slay. She also has an assistant that gross fanboys online are drooling over. Her name is Sonia. Don’t be gross video game boys about her, boys.

Finally, we were introduced to several new Pokemon native to the Galar region. First, we have Gossifleur, the flowering pokemon. Certainly not my cup of tea, but seems like a reasonable grass type that will evolve into Eldegoss, the cotton bloom pokemon. Again, just not necessarily my cup of tea, but to each their own. If you love grass types, Gossifleur might be your thing.

Then, there’s Corviknight, a badass taxi-bird that doesn’t like you. All black, all intimidation, Corviknight is often employed by the Galar taxi service. Seems like an odd choice, but apparently they don’t play around in Galar.

Drednaw is a boss. The bite pokemon, a water-rock type, he’s often released back into the wild because weak punk trainers can’t control him.

Last, but not least, we were introduced to Wooloo, and everything is right with the world. Wooloo is perfect, and already has a community on Reddit with over 800 subscribers. The fan art for Wooloo is wild and wooly, and Wooloo is the sheep Pokemon we deserve. Sorry, Marep. Wooloo dislikes conflict, and instead of being confrontational will simply just roll away. I plan on playing the game with only a heard of Wooloo, and maybe a Sobble. That’s the correct way to play.

Finally, the two titular legendary Pokemon were revealed. They are legendary dogs, one wielding a sword in its mouth, the other bearing a shield-like mane. I was firmly team Sword before this direct, but I really think I like the shield doggo better. The sword-wielding dog is Zacian, the shield doggo is Zamazenta. Yes, the names are nonsense. 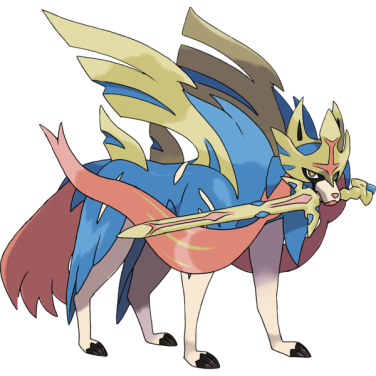 The adventure in Galar kicks off November 15th. What are you most looking forward to?